5. Capt. William Crook Foss (b. Feb. 27, 1915-d. May 16, 1945) Aged 31 years; Son of J. H. Foss killed by enemy artillery fire on Okinawa; He had volunteered for special combat duty; He was engaged in battle survey and intelligence with the infantry.

President of the student body of Maui High School; Graduated from Stanford University

1920 census: music/art teacher in Kansas; 1930 census: public school primary supervisor in Makawao and for the island of Maui; taught two years at Kamehameha III School and one year at Lahainaluna 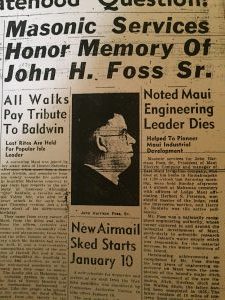