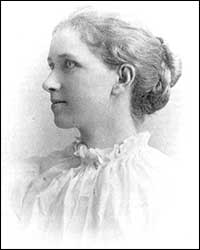 Martha Beckwith was born on January 19, 1871, in Wellesley Hills, Massachusetts, west of Boston, to schoolteacher parents George Ely and Harriet Winslow (Goodale) Beckwith. Harriet’s mother was the great niece of a pioneer missionary to Hawaii, and Harriet was raised in the Mission home at Kailua. George also had been on the islands as a teacher and met Harriet there in 1861. Two years after their meeting Harriet and George were married. In 1867 the family moved to California, and a few years later to Massachusetts. Three years after Martha’s birth, the Beckwiths returned to Hawaii. In addition to teaching at Royal School and Punahou College, Martha’s father developed the Haiku Sugar Plantation on Maui that was eventually managed by the large shipping company of Alexander and Baldwin. While on Maui, Martha befriended Anne M. Alexander who had family ties to the company. As youths, they were among the few English-speaking white children at Haiku, and thus learned the Hawaiian language and participated in many native festivals and customs.